TOOK ME YESTERDAY is here!

Want to support this project?

Please star chapters, share on social media, and check out my published works. 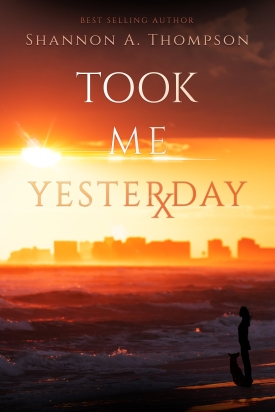 Two months have passed since Noah Tomery escaped the Topeka Region, and Sophia Gray is alone. Lily is under house arrest, Miles is missing, and her father is absent at best. Worst of all, her best friend Broden is up for execution for his crimes.

With the government watching her every move, Sophia does her best to survive. And she’s done pretty well—until now. On the night of Broden’s execution, she cannot stand to be alone, and she risks everything to meet up with Lily to watch his death together. Only, he doesn’t die. He escapes. And the State will not let him go. Sophia knows she’s next.

Forced to flee the only home she’s ever known, Sophia crosses cities ravaged by the drug war with Lily and her loyal dog Argos in tow. When tomo loyalists promise to deliver them safely to the Raleigh Region, where the Tomerys live, it soon becomes obvious that some have other plans for Sophia’s life.

Sophia has to come face to face with what, exactly, the clairvoyant drug does, and how her childhood binds her to tomorrow—and yesterday. But first, she must navigate the tomo empire itself, including its leader: Noah’s father.

Not everyone will survive.