This week flew by for me! Can’t believe we’re approaching 2016 already either. So crazy.

Like last week, I’m working on additions in Take Me Tomorrow, book one of The Tomo Trilogy. I’m 126 pages into it. For original readers, I’m on the chapter No One Was Silent. Out of popular demand, I’ve added some extra info on the Phelps’ Massacre, but I’ve also added some extras myself, like information on the lumberyards, resource trading, why children are involved, and Wheston Phelps himself…which means, yes, there are extra scenes in the new version.

We’re still working on the covers for Bad Bloods! By accident, we worked on part two’s cover before part one, but I’ll tell you what, it’s awesome!

And the winning #1lineWed preview. This week’s theme was sound: The guy’s voice was as crisp and clear as the sound escaping the soda he popped open. He even took a sip.

Extra info: In Bad Bloods, aspartame plays a HUGE role in bad bloods’ lives. For those of you who don’t know what aspartame is, it’s an artificial, non-saccharide sweetener. It’s found in sodas, for instance, but in 2089, it’s outlawed. (There are many studies connecting aspartame to cancer.) That being said, aspartame—for some reason—affects the bad blood gene, and it works as an enhancer of sorts, so one of the protagonists has an addiction to it, which he gets through illegal Diet Coke. Funny thing is, truth can be stranger than fiction. Pepsi took aspartame out of their sodas this past year and is encouraging laws against it, despite the change not being very popular. Maybe Bad Bloods isn’t so far away from reality. 😉

I finished Winterspell by Claire Legrand. The PERFECT dark fairy tale retelling for winter, I gave this dangerous read 5 stars. You can read my full review here, but here is who I recommend it to: Fans of fairy tale retellings, but only to those who enjoy dark and twisted themes, especially with sexual undertones. This book includes a strong heroine, but not a perfect heroine (which, to me, is fantastic), and you’ll love everything if you love epic fantasies with their own world maps to tie everything together. Must love flowery, poetic, and detailed prose.

What I’m Listening To:

Glass Animals. I’ve been obsessed all week. Why? No idea. But it’s been sweet.

Up in the Air: I adore this film, both for Anna Kendrick and the overall feel of the movie. Way to go, George Clooney.

Dark Legacy: This is a JFK assassination (mind-blowing) documentary. Definitely recommended but definitely not for the light-hearted. The photos and videos are very graphic. I’m not saying I agree with the guy’s theory or anything like that, but I do enjoy seeing more information/connections than what is generally explained from traditional sources.

Dark Shadows: Believe it or not, I hadn’t seen this paranormal Johnny Deep movie yet, but now I have. It was wonderful. I enjoyed how kooky it was.

What I’m Baking, Making, and Drinking: 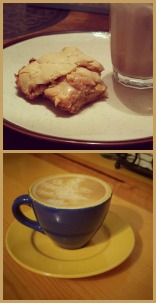 I made Gooey Butterscotch Blondies. NOM! But boy, were those sweet. Super sweet. Dark chocolate chip cookies were also involved this week. I’m insatiable. On top of that, a lovely lady gifted me with new espresso cups for my coffee addiction. I used them within 24 hours. I’m obsessed.

Fuzzy slippers. There are the bee’s knees.

The BFG Movie?! Are you serious?! I had no idea this was being made into a movie, let alone that the trailer was already out. I CANNOT wait. This book was one of my favorites as a child. I absolutely fell in love.

And, GUYS, The Legend of Tarzan movie. UGH. I mean, Alexander Skarsgård is one guy, but Christoph Waltz?? Could it get any better? (The answer is no.) I love them.

AND, AND, the trailer for X-Men Apocalypse dropped too! This is probably the best week ever. You can watch it through IMDB.

What I’m Dreaming Of:

I’m only sharing one ITTY part of one GIANT dream I had, because it was by far the coolest one, but it was SO much longer than this.

Imagine Voldemort taking over the world to fight the Shadowhunters, but add all kinds of mutants from X-Men fighting in-between (not quite sure which side they are on at any point in time). Well, I am one of these in-between mutants. I’m not so much in war as I am trying to get my friends out of the war. So, I sneak into this crazy meeting in an underground party (underneath a grocery store of all things), and everyone here wants to kill me, but I’m disguised. (Of what, I don’t know. I couldn’t actually see me or what I looked like at any point. It was straight through my eyes, which caused this terrible shaky reality video game effect while dreaming.) But I found my friends about the time Voldemort found me, and the entire place erupted into chaos. I helped the youngest of my friends out—two young blondes that looked strangely like Luna Lovegood—and when we got to the parking lot, the building blew sky high, but this mutant kid runs out, and I stop, because I know him. He’s the definition of psychopath. He’s holding a sailing anchor—like the traditional type—and there’s a chain attached to it. It’s practically the size of his torso, but he screams out (for whatever reason), “Looks like you’re going sailing” before he throws the anchor and stabs people onto it, dragging them behind him until he finds his next victim. (And people question why I write so violently?) I managed to pull the anchor out of someone and hold onto it to stop him, but then he drops the chains and laughs, because he knows he can kill other ways. So I try to use his weapon against him, but it’s definitely way too heavy. So…then my cat jumps onto the bed and I wake up in a start and nearly chuck him across the room. I think my cat still hates me.

What Else Is Going On:

So, I don’t normally mention a lot of personal issues like this one, but I haven’t been around a lot on my social media, so I thought I’d say why. I had to get part of my scalp cut off for a skin cancer test. It was in the same place my grandfather had it, so…moving onto the good news: I’m cancer free. So, woot! But it was very stressful and concerning and just overall UGH. I’m also missing a piece of my forehead. But my little bits of hair are already growing back. Expect my face back on Instagram soon.