“Inspiration is hard to come by. You have to take it where you find it.”

This morning, as I took my children to school, I went through a mental ‘to do’ list for the day. That included mundane tasks like laundry and planning dinner, and indulgent things like watching the latest episode of The Talking Dead and buying a mocha. Nothing necessarily inspiring.

After my children were safely in school, I walked back to my car. It was fifty degrees out with the sun hidden by clouds, typical for Washington State. The crossing guard lady nearly had her toes run over by a late, overzealous parent who hopped the curb with her car, then hopped back off as she rushed to drive her child to school on time. So, this little encounter made me really look at the crossing guard. I had seen her many times but never gave her a second thought. Today, it was different. She was suddenly on my radar and then my writer brain kicked in. I observed that she took the nearly getting her toes smashed by a bad driver in stride. I joked, “Maybe the school needs to issue you steel toe boots.” She laughed. I laughed. Then she stopped traffic for me so I could be on my way. That’s when I scanned her one last time. She looked about twenty years older than me. She was a volunteer, perhaps with a grandchild here, I mused. And the final bit that I noted was she was sipping the last of her iced coffee. As I sat in my car, I wondered why she would drink ice coffee as my teeth chattered and my fingers were numb. My conclusion. She is an alien and thrives in the cold.

The point of the above example is that inspiration can come from anywhere. But, I find the best tidbits arrive when I have disconnected from the computer and television and carry on with my real life.

Will the ice coffee-crossing-guard-alien ever be the main character of a full fledged novel of mine? Maybe not, but an echo of her may have a minor role one day.

It’s easy to be inspired by a great movie or song. I mean, I’m currently inspired to drop a few pounds by that car commercial featuring hamsters getting sexy to a Lady Gaga song. That’s the nature of entertainment. Even the news is devised to make us feel something, good or bad.

I’d like to think my life is an ongoing movie with awesome songs on an ever changing soundtrack (currently it’s anything by King the Kid); but my life is just a busy mess of being a Navy wife, mom of two elementary age kids and domestic goddess. And, to top it off, I’m an indie writer who is currently participating in NaNoWriMo, 50,000 words in 30 days? Yes, it’s my second time taking the challenge.

Shannon, the gracious host of this post, entered my radar because she was interviewed by a fellow author, Jackson Baer. I took the time to read about her, as I do out of loyalty because Jackson once took the time to feature me on his blog. I like how things like this come full circle, all Lion King and stuff. But, I liked Shannon’s page a few months ago, and needing a break from NaNoWriMo, came across Shannon’s challenge. What inspires you?

This is what I wrote to her to snag her attention.

I find inspiration by disconnecting for a moment from Facebook, Twitter, email, TV, etc. and just observing. It could be something as simple as an exchange between a mother and child, a glance between lovers or a flash of anger on a stranger’s face. The world around me without the filter of the internet is a great source of inspiration.

I find inspiration from people—watching people, dipping my ear into their conversations, analyzing their body language and reactions. I’m introverted by nature, with social tendencies. So, I’m the ideal watcher. I observe, I absorb. I translate.

I also find inspiration when my mind is not bombarded by the media. When I give myself the opportunity to think without all that noise, without someone else interpreting data for me, magic sometimes happens. I want to extract my own flavors from life. A long drive does it for me. A long walk. A long shower without my children creeping about trying to get in the bathroom with me.

When I disconnect, I reconnect with myself and tap into that fire within. Metaphors and similes on life and situations start gelling for me. And, I jot it down.

I guess a writer’s mind requires a disconnect if we are to find our own voice. It’s true that one writer’s writing style may echo another. My romantic comedy, Secret Shopper, has been described as “Bridget Jones” replacing a British character with a Guam one. I don’t mind the comparison, since I was inspired by that novel many years ago.

A regular disconnect from your devices can prove fruitful. Give a try! But not after you connect with me on the links below. 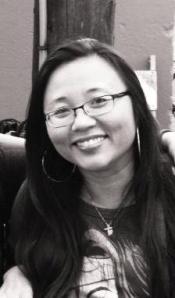 About Tanya-Tanya Taimanglo is a Navy wife and mother of two. Originally from Guam, she’s freezing her buns off in Washington State, but adjusting well—now having an excuse to wear fancy scarves. A former high school English and Creative Writing Teacher, Tanya now enjoys writing up a storm for herself. She had a stint as a Secret Shopper for 4 years. Tanya loves Wonder Woman and Bruce Lee equally and hopes to attend Comic Con for the third time. Taimanglo also published a children’s book, Sirena: A Mermaid Legend From Guam and short stories, Attitude 13: A Daughter of Guam’s Collection of Short Stories.

My novel, Secret Shopper, on Amazon