I was featured on Lit World Interviews, and we discussed Take Me Tomorrow, including the meaning of the title, a few reviews, and what I love most about my characters. I spoke of Sophia and Noah, stating, “when the two come together, a dark serenity clears the tension around them.” But you can read the full interview by clicking here or check out the dark serenity by looking here.

My latest poem – The Autumn Railroad – was added to my interactive poetry series on Wattpad. Be sure to like, comment, and/or share for your chance to be mentioned on Coffee and Cats. Here’s the opening two lines:

“it was a place of great indifference, the type

of indifference that only happens in limbo…”

The Five Emotional Stages of a Book Signing

On Thursday night, I had my first book signing in seven years, and I have to admit that it was both fun and nerve-wracking (but mainly fun). I have uploaded a few cellphone pictures onto my Facebook page, but I’m expecting to get a few clearer ones up soon. Other that that, I thought I would share my emotional stages of my book signing – before, during, and after. Special thanks goes out to the venue, Ice Fire Hookah, and my management team at Cultivated Arts.

I woke up, and my thoughts were all over the place. Between planning and realizing my plans weren’t working out, I was losing my mind. It was raining. Oh, god, was it raining. I had a river running through my backyard, and I don’t even have a backyard. Or a river. I had already admitted defeat, thinking no one would dare drive through such chaos, but then, I remembered that Midwesterners are…well…used to the crazy weather. That, and the weather cleared up right in time for the book signing. Thank, Zeus.

Stage Two: Rolling with the Punches

Speaking of Zeus, he is the reason I did not have homemade muffins. That’s right. Homemade, chocolate chip muffins. It’s one of the few awesome things I can actually bake, and I did not get a chance to bake them. Silly me for thinking I had any control over the day. Zeus decided to have a fight outside my apartment, and the electricity was out all morning. So…I bought them, but the good news? I only ended up coming home with a single blueberry muffin, so I think readers enjoyed them, and having free treats is a fantastic way to start a conversation. Who doesn’t like free sweets?

I should’ve mentioned that I bought 30 muffins, and those were not the only freebies I brought. I also had business cards, bookmarks, tea, and…holographic cat stickers. (Not to mention a handy tips jar). Why? You should be asking why not. The only issue (if I can even call it that) was packing everything up and getting everything, including 50 books, to the venue without destroying the items or myself. On top of that, when I finally did arrive, my loving little team had to set everything up, and we ran out of tape (which ended up not mattering because the poster didn’t stick to the table anyway), and the dim lighting was really difficult to work with in terms of photography. But – on the bright side – I got a Peter Pan shadow in my photos, and everyone was able to see the gifts and books easily. With some great help from my event’s manager at Cultivated Arts, I think we had a wonderful set-up. 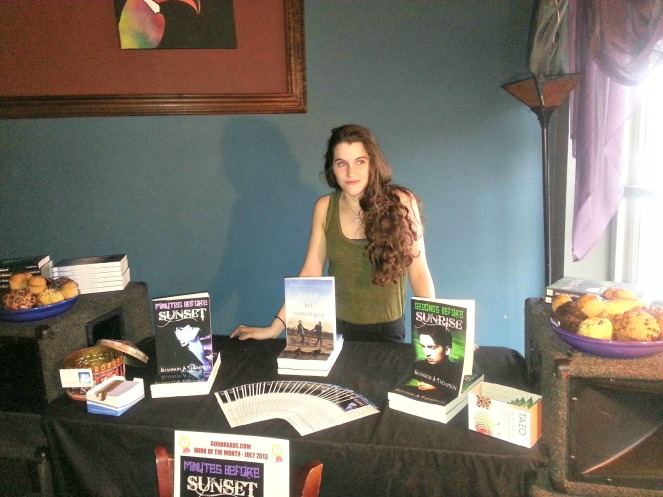 I know. I know. The whole point of you reading this is about this part, but I’ll tell you what – it goes by really fast. People actually want to know what your book is about. No. Seriously. Those elevator speeches did me some good. Hearing “sold” after giving one is quite the moment for me. My publisher has always told me they would come in handy – and they have – but my book signing truly showed me just how important they are. Elevator speeches were MADE for book signings. (Okay. That could be an exaggeration, but get one. You’ll love them.) In fact, I had a lot of fun saying them and speaking with readers about different aspects of the novel. I even got to talk about my future projects and other projects – like my poetry series – and I laughed a lot. Just a warning though: it’s ridiculously hard to concentrate when someone is taking a picture of you while you’re talking to someone else. Awkward smiles ensue. Awkward but delightful.

When it’s all said and done, there’s some cleanup work and a giant thank you to the venue. We even got a giant group photo at one point, but I don’t have a copy yet. I’m looking forward to it though! I can admit that I went in thinking I wasn’t going to sell a single book. I guess I am one of those people who doesn’t want to go in with expectations because I don’t want to be let down, but we did sell books, and we did meet readers, and it was everything I could’ve hoped for. Then again, I am hoping that I get another opportunity for a book signing like this. It brought me great joy, and I hope the readers were also happy during the entire event. By the amount of muffins taken and the smiles I saw, I think we all were, and that is a priceless adventure any author loves.

15 thoughts on “The Five Emotional Stages of a Book Signing”