In my latest interview with eBook Review Gal, I discuss my favorite types of self-promotion, my novels, and more! A small excerpt is below, but you can read the full interview by clicking here.

“What would readers be surprised to know about you?

I quit publishing for five years. I honestly gave up all hope, and it took me a long time to gain confidence in myself and in my writing life again. If it weren’t for the encouraging readers on Wattpad, I don’t know if I would’ve found the courage to return. Readers are powerful. They are the best friends of authors, so I’m eternally grateful for every person who has taken even one minute to check out my work or email me.”

Why Bad Things Happen to Round Characters:

I spend a lot of time on the blogosphere. I read book reviews, comment on discussions, and stumble upon opinions that make me cringe. But – alas – we all have these opinions, and I want to share one of mine today. Bad things will happen to characters. Their past will be messed up, their present will be tense, and their future will probably take a tumble every now and then. This is a sign that the story is eventful and the characters are round. (#SorryNotSorry)

So why am I saying this? (Okay. I’m sorry for using a hashtag outside of Twitter.)

I recently read a list of popular cliché complaints as fans displayed them on my Facebook newsfeed, but only one stuck out to me. The reader was tired of seeing “damaged” protagonists. For once, they wanted a character that didn’t have a past that affected who they were, and they were definitely sick of seeing two damaged people coming together as love interests

Okay. I’m going to glue a pillow to my desk, so when I slam my forehead against it, I don’t get a concussion. But – first – I’m going to write this article.

Okay. So the equation isn’t that simple, but round characters definitely contribute to relatable characters, and round characters include past, present, and future. If they had a perfect life, there would be nothing to talk about. On the flipside, bad events can build character, which means it can round out a fictional character, and it can make a person more relatable and real for readers. 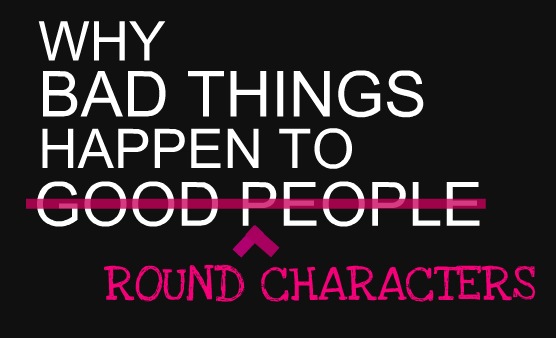 This goes back to the complaints surrounding an abundance of dead parents and siblings in fiction. Of course someone has died somewhere in the book. That’s because everyone dies, and – unless the book takes place in a magical, immortal universe – I better see someone who at least knows someone who died or the threat of death isn’t present.

This correlates with bad events. If nothing bad has ever happened to a character, especially an older character, how could they have any perception of danger? Of life? Of happiness? Call me the cynical one, but how can you truly appreciate sunshine if you’ve never had to be locked out in a thunderstorm? (Figurateively speaking, of course.)

This is when my evil demeanor to comes out – how dare we describe people as ”damaged” (especially when their trauma is beyond them.) This phrase seriously sickens me. We’re all human. Everyone has damages, sure, but we aren’t damaged. We aren’t objects. We are people. By describing a person or a character as “damaged goods” we have placed that second word on them: goods. Which they are not by the way. Goods can be bought at a store. People, in an ideal world, cannot be.

Just to clarify, I am not hating on characters that have had nothing happen to them. In fact, in Minutes Before Sunset Jessica states, “I knew nothing of death, and for some unexplainable reason, I was beginning to feel guilty for that.” Yes. She’s had hardships but not of that kind (in her opinion.) But my point rests in the future. If a character has had nothing happen to them yet, but then something happens in the book, they should react like someone who has never had to go through anything. I, personally, cannot stand a story where a character who’s never held a gun picks one up and blasts away zombies like it’s nothing. Sorry. But I’ve spent time in a gun range. I see how people react the first time they pick up a gun, and I would hate to see how they react if it was a life or death situation. But – back to the main point –

Bad things will happen to characters in their past, present, and future. Just check out a Disney movie and see how many of their characters have happy beginnings. (Spoiler Alert: not many.) And hopefully – somewhere along the way – these events will shape those characters into people we can all relate to, look up to, and explore with. Hopefully, those bad things make them human, and good things will happen, too.

25 thoughts on “Why Bad Things Happen to Round Characters”