Prepare for laughter during today’s post. But – before we get onto the giggles – I want to share two important bits of news.

Paris Carter reviewed Seconds Before Sunrise, stating, “The novel also includes several internal struggles for Eric and Jess that sparks tension throughout the entire novel, and it’s the chaos of them struggling to work out their answers and fight themselves that bring Shannon’s novel to a second dimension.” Read the entire review here or check out his review of Minutes Before Sunset first.

I also participated in an interview with Doodles, doodles everywhere. We talked about what hurts me the most as a writer, and I expanded on the research that went behind The Timely Death Trilogy. Check it out.

It’s been a few days since I participated in my first podcast interview, but I wanted to write about something fun since my last post was rather dreary. That’s when my mind immediately returned to The Lurking Voice. (Just a small, Kansas City update though, they found the Highway Shooter, so things feel a lot better around here. Maybe that’s why I’m so eager to post something I can laugh at…I mean, laugh with you…as you laugh at me.)

Back to the topic.

If you listened to the full interview – which you can by clicking here – then you know that I confessed to many writing strategies that I haven’t mentioned before, although “strategies” will quickly turn into a debatable term during this post. My ultimate, reluctant confession happened when we discussed November Snow, my first published novel.

I was 11 when I started writing it and 16 when it was published. It’s safe to say that it isn’t my best work, but I am planning on re-writing it. As we were discussing this, Ryan Attard asked a great question. How does a preteen plan a novel out? That’s when I said it.

November Snow was based on a game that I played out with my Barbie dolls as a much younger kid. Now, if you’ve read November Snow, then you might be concerned, considering how violent the book is, but there’s no need to be concerned – (I think.) That’s what I told my high school teachers anyway when I was asked about the dark nature of it. But that’s another story for another day.

Today, I wanted to share a funny truth to November Snow. No matter how dark the story is, many of my characters were actually based on the dolls I used. I admitted to it on the podcast, and now I am re-confessing it on here. Even better, I dug through some boxes, and I found the old toys, so I’m sharing a few of them as well as small excerpts from the novel that proves this goofy aspect of my writing.

A little background before we begin:

November Snow is a young-adult, dystopian novel, and it is told from dual, first perspectives: Daniel and Serena. Unfortunately, I lost the Serena doll (she might have lost a limb or two or maybe even a head.) But I still have Daniel, who you will see soon. I’m going to share three pictures, and each picture has numerous characters on it. Below each picture, I will have a one-sentence background, and below that, I’ll be sharing the real excerpt from the novel. I’ll also include page numbers as well as who was telling the story at the time (Daniel or Serena.) I am also including a little note, explaining how my 11-year-old brain worked. Got that? Okay. I even think I’m lost, but trust me – it’s organized. Hope you chuckle as much as I did writing this post! Traveling to the past can be a funny adventure.

First picture: from the left to the right: Robert, Daniel, and Calhoun.

“I turned around to see Robert’s dark brown eyes staring at me, and my heart lunged into my dry throat…He muttered something, his brown hair shagging in his face, and I laughed. “ (Serena, 156-7)

Note: Believe it or not, he’s not the antagonist. Sort of?

Daniel: 18, leader of the Northern Flock (all around hunk)

“The guy looked like Daniel. He had the brown, muffled hair and tanned skin. He even had the blue and white jacket down, but he wasn’t responding to his name.” (Serena, 181)

Note: So, if you didn’t notice, I even based some clothes off of these toys.

“From the bottom step he could have been mistaken for a modern-day giant. His face was strong, as were his muscles, and he looked like he could barely fit into the sweater he was wearing. He had been in a POW accident, in which he had lost one of his arms, but he refused to tell the story. Normally, he had a fake arm in, but tonight, a gray sleeve dangled at his side, blowing in the chilled November wind.” (Daniel, 25)

Note: if you listened to the podcast, then you know this character actually ended up being very similar to my real father. Except my dad has both arms. And he’s not a vet. But I swear they are alike.

Second Picture: from left to right: Daisy and Maggie 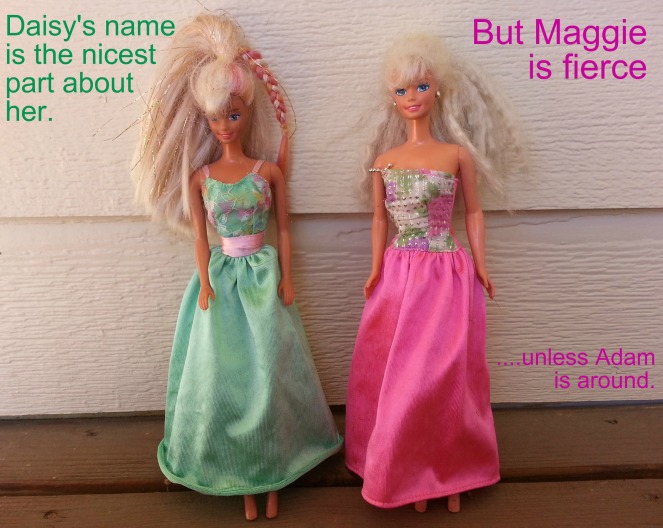 She doesn’t deserve a note or description. Seriously. Have you ever hated your own characters so much that you regret bringing them into existence? I think Daisy might be in my top three of characters I’ve created and despised. #authorproblems.

Maggie: 16, member of the Northern Flock. (crushes on Adam in private)

“The front door opened, and Maggie walked in. She was wearing a small, pink coat and white disco pants that had gone out of style a century ago, but she still pulled them off easily.” (Daniel, 240)

Note: is it just me or is Daniel incredibly aware of fashion trends?

Third picture: from left to the right: Amy, Justin, and Marisa

Now for the youngsters, the category of characters that caused one of my high school teachers to ask if I needed to talk to someone after she read my novel and discovered only a few of the characters survive. (Seriously. It’s on the back of the book…) From left to right, we have Amy, Justin, and Marisa. 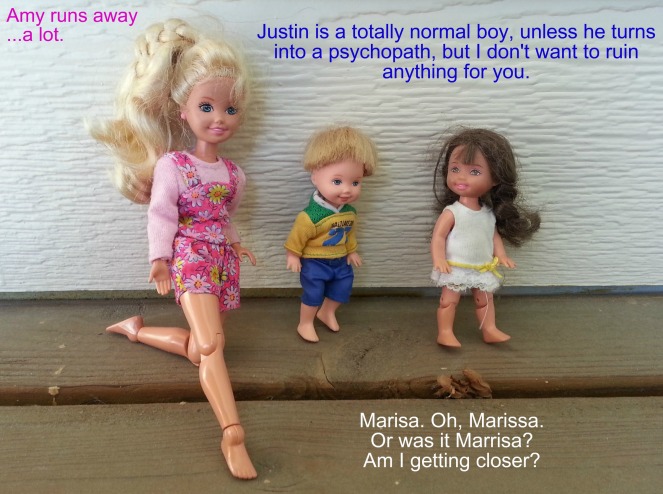 Amy: 14, member of the Southern Flock. (Hates being called “Amy.” Her name is Amiel Marie Young.)

Note: So this was more of a hairstyle thing, and you can’t really see it in the doll anymore, but it was there. I promise.

Justin: 6, member of the Southern Flock (borderline obsessed with hockey)

“Justin, blond-haired and brown eyed, was whisked off his feet by the collar of his shirt.” (Daniel, 479)

Note: There’s actually a hockey scene in the book just for this hockey-themed doll. (I really have no shame as I share this, do I?)

Marisa: 7, member of the Northern Flock (too small to crush on Adam, but apparently, all the girls like Adam…maybe I should’ve shared Adam.)

“A small girl struggled her way into Adams’s lap and leaned her bony elbows onto the table. She had long, brown pigtails that rested on the wiggling table and innocent eyes.” (Daniel, 44)

So there you go. My young-adult novel that almost got me in trouble as a teen was originally created during playtime as a kid.

Try to figure that one out.

35 thoughts on “Writing with Barbie”